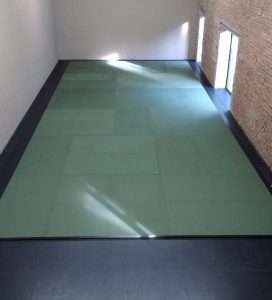 You’ll find us in the middle of the valley, by the groves of trees, playground etc, easy to find. You will see us 🙂

The first day I went to the Open Practice Sessions (OPS) at the Volkspark Humboldthain, I had to follow this hint.

The spot itself was indeed easy to find, though from a distance it took me a while to spot the ‘us’ I was looking for, the group of people practising. The circle in which they were arranged was so scattered that at first glance they didn’t seem to belong to each other. Immersed in the autumnal landscape at the climax of its visual magnificence, the loose gathering of five was mimetically integrated into the lively pattern of the multicoloured carpet of leaves, early morning strollers and joggers, groups of kindergarten kids, dogs whizzing around and trees moved by the wind.

Looking more carefully it could be seen that they were connected somehow. They gazed and smiled at each other occasionally, as they moved in a kind of morning wake-up ritual.

Usually a soft continuum in the rehearsal space, Isabelle’s voice guiding the practice is was audible only in fragments here, dispersed and confused into the soundscape of natural and urban noises mixing together.

I think about the sense of togetherness that I witnessed during the last OPS in the Wiesenburg Halle,1 and about how much this was facilitated by the evocative power of the choreographer’s words and by the intimacy of the rehearsal space.

Circumstances have radically changed since then.

The OPS have been happening outdoors since early November 2020. In a gesture that to my mind has much to do with a biological drive of adaptation and survival – not too different from the instinct that has been pushing humankind, animals, plants and other species to look for environments that ensure better living conditions – Isabelle decided not to give in to the paralysis and suspension dictated by the announcement of the second lockdown in Germany, but to find possible alternatives to continue moving together. Thinking about her long-term interest in challenging the dualism of interior and exterior (of the body, of the self), it seems that the new circumstances have produced a new, spatial articulation of this dynamic relation: Isabelle’s practice has migrated from the familiar, ‘protected’ space of rehearsal and theatre premises to the outdoors, the place of exposure par excellence, and yet the only place currently offering a degree of security while breathing the same air.

Through this migration a new path full of potential has emerged.2 In outdoor space the OPS have found their place among a small ecosystem of people, plants, animals, earth, stones and stories.

The idea that each of us is one part of a whole kept together by visible and less visible interconnections is a guiding principle of Isabelle Schad’s artistic approach, especially when working with groups. Practising outside, exposed to all kinds of human and more-than-human interactions, makes this connection evident.

It is a suggestive coincidence that we are in a park named after Alexander von Humboldt, the German polymath, geographer, naturalist and explorer who in the mid-1800s ‘resurrected the use of the word cosmos from the ancient Greek and assigned it to his multivolume treatise, Kosmos, in which he sought to unify diverse branches of scientific knowledge and culture. This important work also motivated a holistic perception of the universe as one interacting entity.’3 In the construction of the park that started on 14 September 1869, the 100th anniversary of his birth, Humboldt’s credo was visualised through the planting of various woody plants from Europe, Asia and North America. There was also an actual botanical garden with an outdoor vivarium for native reptiles and amphibians, and in 1896 a ‘geological wall’ was begun in the park to show a cross-section of the rocks of Central Europe.4 In this way this ‘people’s park’, literally translated from the German ‘Volkspark’, was in itself a sort of man-made multi-species microcosm, made up of organic and non-organic entities.

Since then history has contributed to add some level of complexity to the entangled relations between nature/humankind, nature/culture. It requires imaginative effort to believe that the hills that give the park its typical dynamic formation are actually made up of ruined bunkers from the Second World War. Or that on the other hand the bunker that still towers at the top of the highest hill becomes the comfortable home to thousands of bats during the winter months.

This image mitigates my instinctive hostility towards this architectural giant and its symbolic meaning. The inanimate coldness of the building meets the warmth produced by a mass of breathing creatures, huddled together. And the bunker turns into a maternal and protective entity.

My practice of observing and recording the practice has also been influenced by the surroundings.

My hands soon freeze while I try to write down notes. The damp cold ground is not ideal for sitting for hours and going on the journey of watching, as I usually do in the Tanzhalle Wiesenburg.

Best to walk around, to stroll along the big perimeter around the practitioners and beyond. The frontal attention facilitated by the theatre and rehearsal space is distributed here among the many things and people around.

Isabelle, Emma, Jan, Aya and Doro, on the other hand, look totally concentrated and immersed in their exercises with the stick, which day after day is becoming a sort of  organic extension of their own bodies. From time to time spectators stop by, and an unconscious mimetic instinct causes a leg to be stretched or the head to be rotated.

At this stage we don’t know when it will be possible to go back to work ‘normally’ in the rehearsal spaces, but I’m already asking myself what traces this experience of the outside will leave in the practice.

‘The difference between imagining sky and touching the sky brings a lot of joy’, Jan wrote to me, when I asked what it meant for those who are practising to be outside.

I think about how for centuries, since its beginning in Greece in the 6th century bc, the place of theatre was actually been in the open air, in arenas, squares and streets.

It was only during the Renaissance that the theatre moved into buildings. One of the first theatres of this kind still existing today is the Olympic Theatre in Vicenza (Italy), constructed in 1580–85 and designed by the Italian Renaissance architect Andrea Palladio. Its interior is a sort of 3D scenery of architectural elements and paintings that give the impression of being right in the middle of the city square.

I like to see this as a sign of how strange, confusing and maybe even painful this transition from the outside into the inside might have been.

The pandemic has somehow forced the reverse of this transition, and while the first signs of spring are peeping through, many theatres are announcing open-air programmes and events for the upcoming good season.

‘Healing and rehabilitation cannot be a simple negative gesture of social retreat, of the immunological closing of the community. Healing and care can only stem from a process of political transformation,’ writes Paul B. Preciado in his text ‘Learning from the Virus’, and adds: ‘To stay alive, to maintain life as a planet, in the face of the virus, but also in the face of the effects of centuries of ecological and cultural destruction, means implementing new structural forms of global cooperation. Just as the virus mutates, if we want to resist submission, we must also mutate.’5

Like a chameleon – as Isabelle says – during the long Berlin winter the OPS have gradually mutated into a quotidian necessity, into a ritual of healing (or staying healthy) through the power of togetherness. Being outside, in nature, in public space, has exposed the practice to interconnections, interferences and contaminations with poetical, political and ecological potential. All this potential is available to dance, theatre and art in the forcibly rediscovered open and public space.

As I leave the park, a dog darts past me with a happiness in its eyes that seems unconditional. For a moment I feel like I can sense its same happiness.

1 See the text ‘Open Practice Sessions: On Research, Hospitality and Practising with Tranquillity’ on this website

4 The geological wall was transferred in the botanical garden in Berlin Blankenfelde in 191,2 and it is still there today. More info: link, accessed 18 March 2021

5 Paul B. Preciado, ‘Learning from the Virus’: link. 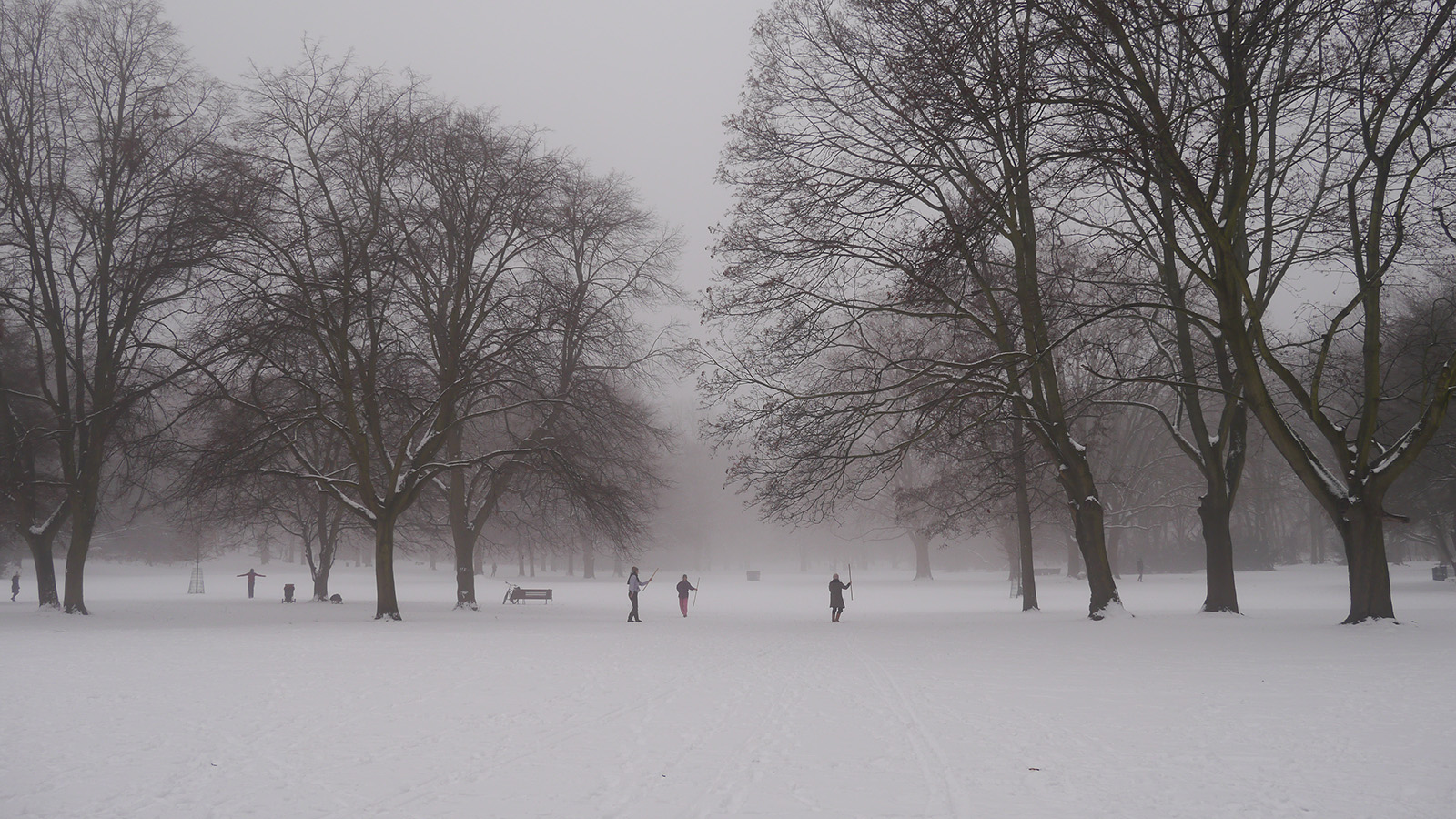